This article concerns eye surveys designed to obtain and examine an unbiased random sample of individuals from a defined population, so that the prevalence of various conditions (such as visual impairment and serious eye disorders) in the population may be estimated with adequate precision.

To calculate the required sample size, the following have to be specified:

a) Maximum random sampling error that can be accepted (E), under various assumed values of the actual prevalence (P) of the condition in the population.

c) The likely design effect (W ), which depends upon the method of sampling, and may be regarded as a penalty for deviating from simple random sampling.

The approximate (minimum) sample size can then be computed using the following simplified equations:

The equations in the box take into account the sampling fraction n/N, and the design effect W , in an appropriate way so that ‘silly’ results are avoided when the sampling fraction and W are both large. Under these conditions, some sample size calculation software such as the EPITABLE module of EPI INFO: version 6.04a (otherwise an excellent software package) may give sample sizes that are larger than the population size! 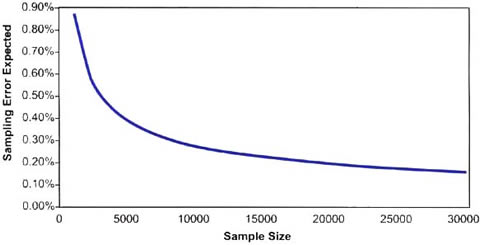 Sample size(s) should be calculated to give adequate precision for estimating the least prevalent condition that is of primary interest. This, however, should be done with due regard to the main objectives of the survey.

The term PQ in the equation above is a measure of variability in the population. Maximum variation exists when P=50%.

The higher the variation, the larger the required sample size, ceteris paribus. This effect on sample size, however, is more than compensated for by accepting relatively large random sampling errors. Therefore, in general, high prevalence conditions require smaller sample sizes.

In general, for a given sample size, cluster random sampling schemes with many small PSUs and no more than 2 sampling stages give more precise results (lower sampling errors) compared to schemes that have few but large PSUs or involve many stages of sampling. In addition, if the eye condition of interest is highly clustered in small pockets within the population (e.g., trachoma), then much larger sampling errors should be expected from cluster random sampling methods.

In practice, when computing sample size, it is difficult to know what the design effect might be. Experience from surveys in the past 10 years or so suggest that for estimating prevalence of blindness, or of any other condition which has a fairly uniform distribution in the population, it is safe to assume a design effect of say 1.5, (W =1.5), provided that a fairly simple sampling method is to be used, such as single-stage cluster random sampling with average cluster size of about 300-400 persons. For estimating prevalence of active inflammatory trachoma or any other condition that might be highly clustered, much larger design effects (5 or more) should be specified.

Gain in precision from stratification

Stratification in sampling surveys involves sub-dividing the population into 2 or more distinct groups (strata), covering the entire population, then drawing a sample (usually a proportional sample) from every stratum using simple or cluster random sampling methods. This is usually done in the hope that sampling errors might be reduced, and/or to obtain better geographic coverage of the population. If stratification is to reduce sampling errors substantially, then the strata should be defined in such a way that the difference in prevalence (or risk of the condition of interest) between the strata is maximised. This is hardly ever achieved.

Appropriate stratification of the population may reduce sampling errors, and therefore allow smaller sample size for any given desired precision in estimating prevalence. The gains in precision, however, are not likely to be substantial in most eye survey situations. In calculating sample size for eye surveys, it is safer to ignore the possible gain that might arise from stratification. There are two main reasons for this suggestion. First, the more complex equations demand that fairly accurate assumptions are made about the prevalence in each stratum, and about the stratum-specific design effects. These are usually difficult and often virtually impossible to foretell with any confidence. Indeed, if such accurate predictions could be made, the survey would be redundant. Second, the predicted design effect tends to be set too low, so that ignoring the possible gains from stratification should, to some extent, compensate for the too hopeful prediction of the design effect. Accordingly, the simplified equation proposed above does not take into account any possible gains from stratification.

The primary objective of an eye survey is to estimate the prevalence of blindness and of low vision in a rural population of 0.5 million. A single-stage cluster random sampling method is proposed, with an average cluster size of ~ 250 persons. The population is to be divided into 3 main strata, according to size of the rural communities, and a proportional sample drawn from each stratum.

Therefore, a sample size of about 9000 is required.

Many scenarios should be tried before a final choice is made. For example, if the sample size is fixed at 8000 because of limited resources, and the design effect turns out to be 2.0, what precision will the estimate have? This may be answered by setting W=2.0, and increasing E in small steps until a sample size of around 8000 is reached. The process is easy and quick when the equation is incorporated into a computer spreadsheet or other suitable program. Alternatively, the following equivalent equation may be used, to estimate E for any given sample size n:

where f is the sampling fraction n/N, and may be ignored if it is very small.

More detailed discussion of complex sampling methods, including the optimal size of sampling units in various stages of multistage sampling, can be found in ‘Sampling Techniques’ by William G. Cochran.1

Please support the journal. Donate £30 and send the Community Eye Health Journal to an additional two grass-roots eye care workers
Continuing professional development Quizzes and tests to help you test your understanding of the content covered in the journal